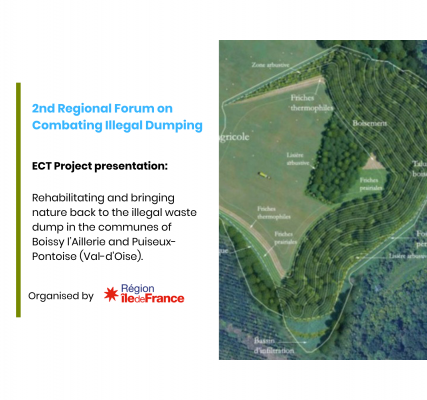 A forum to support communities and local authorities

The situation is just getting worse. Illegal dumping or fly-tipping is a national scourge and it is increasing. Alongside illegal occupation of land, illegal dumping is increasingly intense. This antisocial activity destroys the landscape and the environment. The assessment and removal of waste is very expensive for public authorities, and so is the rehabilitation and redevelopment of sites. It was in this context of support for communities and local authorities that the Île-de-France region organised, on 3 December 2020, the 2nd Forum on Combating Illegal Dumping (‘Forum de Lutte contre les Dépôts Sauvages’).

ECT’s involvement: Rehabilitating and bringing nature back to a site where there has been illegal dumping in the Val d’Oise département.

Laurent MOGNO, chairman of ECT and Clara DIDIER, ECT’s director of projects, presented this project to the interested parties:

Michel GUIARD, Mayor of Boissy-l’Aillerie (Val d’Oise), summarised the problems that this situation presents to the communes.
“There is very little that a commune can do when confronted by illegal occupation of land. In this instance, 300 people were occupying the area. Illegal dumping started very rapidly, with no real possibility of intervening to stop the flow of waste. In this instance, the occupation lasted 5 months, the degradation of the site is significant, and the commune has been left in a position that is very hard to resolve. The Prefecture intervened to evict the occupants, but has not been able to resolve the problem of waste.
The question remains: How to rehabilitate the site?”

ECT finances the project by bringing in soil excavated from nearby urban work sites.

The goal of the ECT project at Boissy/Puiseux is to heal a very damaged landscape. The proposed approach takes into account all the constraints applicable to the site: Landscaping, ecological and hydrological issues, on the scale of the individual site and on a regional scale.