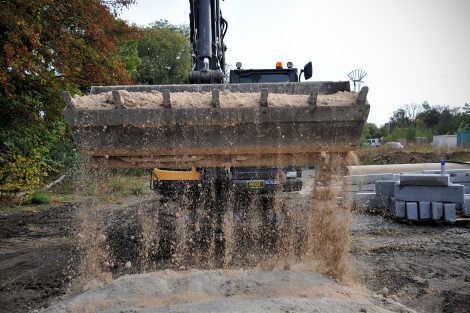 The “EarthMakers” group commissions its demonstrator of fertile substrate that is 100% recycled, local and community-based.

On the Lil‘Ô site in Île-Saint-Denis (93), the “Faiseurs de Terres” or “EarthMakers” roll out their fertile substrate pilot scheme or demonstrator. The EarthMakers group is made up of Neo-Eco, Halage and ECT and it pools their skills and resources. The objective: To prove the process of producing a fertile substrate; a growing medium consisting entirely of recycled products. It’s made from inert soil, crushed concrete and compost from green waste.

The EarthMakers firmly believe that this fertile substrate, which is recycled, local and community-based, should become the growing medium for ‘greening’ the regions, and that it will be an important driver for the development of training and jobs.

Proving the process of producing the fertile substrate

This demonstration facility is co-financed by Plaine Commune and the EarthMakers. It’s the fruit of two distinct initiatives – Plaine Commune’s consultations and reflections on urban metabolism, and more specific discussions between the three members of the consortium about ‘technosols’.

The goal of this initiative is to carry out experiments and testing, and to establish where, when and how to create a fertile substrate. This substrate is to meet national standards and to be able to satisfy different requirements for use in green spaces and natural spaces. This experimental pilot scheme will be used to create a technical and scientific framework.

The EarthMakers training programme is an integral part of the project. It’s a programme of skills training aimed at people doing work experience. Training is a full part of the pilot scheme and represents its human resources.

A project to promote re-planting in the regions

This pilot scheme forms part of a ‘circular economy’ approach to materials and planting in urban areas. The fertile substrate produced by the EarthMakers is derived entirely from recycled materials:

One goal of the pilot scheme is to ensure strict traceability for the product, all the way from the producer of the waste to the site where the product is used.

Lastly, through these experiments the EarthMakers intend to produce fertile substrate locally, as part of the urban metabolism for the Île-de-France region. The substrate is to be the growing medium for greening both large and more modest regional projects, thus avoiding the ecological own-goal of importing topsoil on a large scale.

For more about the other members of the group, see: