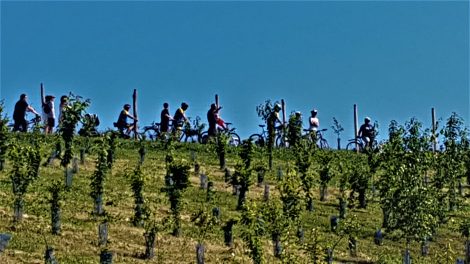 On 22 June, Line Magne, the mayor of Moissy-Cramayel, Anne-Marie Démoulin, the deputy mayor responsible for sustainable development, Betty Chappe, the deputy mayor responsible for developing the eco-district of Chanteloup, and Laurent Mogno, chairman of ECT, inaugurated the Arboretum Park. This park is a new leisure space, open to the public in the eco-district of the Arboretum de Chanteloup.

The opening ceremony was an opportunity to explore this new park, a magnificent ‘green corridor’ or planted walk, on foot or by bicycle. It has nearly 2 miles of walking / cycling routes, a street workout zone and an arboretum. The sports associations of Moissy took an active part in the day. In particular there was the Kids Stride Out event by the Inisports school, and Moissy-Cramayel Athlétisme, Moissy Musculation, Rando Nature et Loisirs M-C, Cyclo Club Moissy-Cramayel and the UFOLEP of the Seine-et- Marne département were also represented.

“I’m delighted that this park has finally become a reality and I thank the ECT company for bringing this ambitious project to a successful conclusion, together with the municipality’s own departments. As with the town’s other neighbourhoods, our eco-district will now have its own jewel-box of greenery. It’s a new place that the people of Moissy will not take long to make their own, in their own way to suit their wishes: strolls, sport, picking from small fruit trees, discovering the flora and fauna … “ Line Magne, mayor of Moissy-Cramayel

As set up by the ECT company, the creation of the park was completely funded by bringing in inert soil from construction & public works sector sites in the south-east of the Paris region. This has also funded landscaping, educational and sports developments.

« For the last 18 months, ECT crews have been working to create and finalise the Arboretum Park, in tandem with teams from the town hall. ECT’s business is creating land-use developments that are useful to the community and local authorities by re-using excavated soil. The Arboretum Park is a very fine example. » Laurent Mogno, chairman of ECT

The orchard, the lake and the arboretum enhance the landscape and the walking area

The deliberately environmental nature of these spaces for biodiversity has an educational aspect. The educational side appears in the many interpretative panels to help people explore the various sites and trees in the park. With the fruit trees in the orchard and the remarkable trees in the arboretum, the park is home to a lot of trees. There are typical native species as in the nearby forest of Sénart such as the pedunculate oak, the alder and the yew; and exotics such as the Japanese pagoda tree and the cedar of Lebanon.

A park open to all: Families, sportspeople and people with disabilities

As requested by the Town Hall and local associations, the Arboretum Park is accessible to all, and proudly aims to get the “Tourisme et Handicap” label. That means providing facilities suitable for this section of the public. Half of the routes are accessible to all, and they make it possible to visit the whole park. The signage, and the access to signage, have been developed specifically with this in mind.

An eco-district enhanced by the Arboretum Park.

The eco-district of Chanteloup already contains new homes and an urban farm. There is a plan for the construction of more new homes. The Arboretum Park represents, as a public amenity for shared leisure and sports, a new vector in the residential aspect of Moissy-Cramayel.