3 questions for Jonathan Bryden, director of the “New Products” department 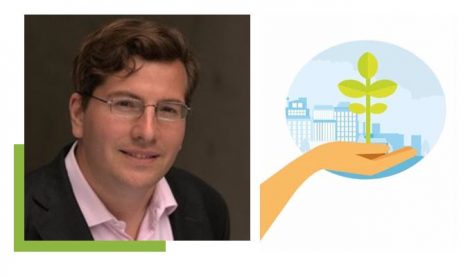 3 questions for Jonathan Bryden, who joined ECT in September 2019. He is director of the “New Products, New Services” department. That puts him at the heart of the business’s innovative approaches and the monetising of ECT’s fertile substrate, Urbafertil.

What were the origins of Urbafertil?

The origins of Urbafertil go back a long way. The interactions between our land-use developments using inert soils and the fertilisation of the soil emerged very rapidly as one of the key issues in our work as developers.

From 2002, ECT was involved when some parts of the Park de la Corneuve were ‘greened’ with a mix of excavated soils and compost. The experiment was observed and funded by the Council of the département of Seine-Saint-Denis.

Building on that, from 2002 to 2013, ECT was associated with a scientific committee on fertile substrates which included representatives from ADEME, from the Conservatoire Botanique National, from INRA, from the UMR Biogéochimie et Ecologie des Milieux Continentaux, from the Université Paris Est and from the Bioemco laboratory.

The work of this scientific committee resulted in a 4-year phase of experimentation (2013 -2017). This experimentation took place on the ECT site at Villeneuve-sous-Dammartin (in Seine-et-Marne, 77).

It was observed scientifically by Charlotte Pruvost, a PhD student at the Institut d’Ecologie et des Sciences de l’Environnement in Paris. The title of her thesis was:

“The potential for biodiversity in the construction of technosols from urban waste“.

This thesis was presented in December 2018 before a jury consisting of members of the Muséum National d’Histoire Naturelle, senior lecturers from the University of Lorraine and professors from the universities of Rouen and Dijon.

In 2019, ECT set up a Research & Development department. Based on prior experimentation, one of the tasks of this department is the production and monetisation of a fertile substrate or growing medium. Production work is done in close co-operation with Biodepe, a subsidiary of ECT that specialises in organic waste and soil fertility. From December 2019, ECT was able to take this to a new level, by offering communities and local authorities its own brand of fertile substrate: Urbafertil

Why use Urbafertil as a growing medium?

Today, when a local authority is looking at projects to restore vegetation, the common practice is to import topsoil. These soils are stripped from fields located outside the towns and transported to the site where they’ll be used. However, there are solutions that are local, recycled and highly effective. That’s why it is important to think outside the box and favour bringing in local products.

It’s important to note that the traceability of topsoil is not always optimal. Urbafertil is partly made from inert soil from construction and public works sites located near the site to be ‘greened’. These inert soils have the advantage of compulsory traceability for excavated soils..

Urbafertil is produced purely by recycling, and comes from the combined re-use of inert soil and compost made from vegetable waste. Urbafertil is a successful example of ‘circular economy’, with very competitive prices compared to the price of topsoil.

A number of projects to create growing media using Urbafertil are under way in the Paris region.

What are the new products and new services that you are working on?

The whole ethos of ECT’s R&D department and the management of “new products and services” is to encourage a forward-looking and innovative approach. ECT has committed itself to this approach of innovation by creating partnerships with innovative businesses. The goal is to offer to communities and local authorities a range of new products and services to meet their need for estate management and development.

This has already resulted in the launch of the Urbafertil substrate, and also membership of Cycle Terre. This organisation aims to create a pathway for re-use of inert soil from the construction & public works sector, constructing new spaces from raw earth.

We are very aware of the environmental and societal impacts of the developments we carry out. And we are conscious of their potential, and their ability to have an extremely positive impact in the medium and long term. ECT is currently working on tools to make it possible to highlight the effectiveness of our solutions from the environmental perspective, and to demonstrate their advantages over other solutions.