Accueil > Official launch of « The Eyes of the Sky », a work of metropolitan land art on the ECT site at Villeneuve (77)

Official launch of “The Eyes of the Sky”, a work of metropolitan land art on the ECT site at Villeneuve (77) 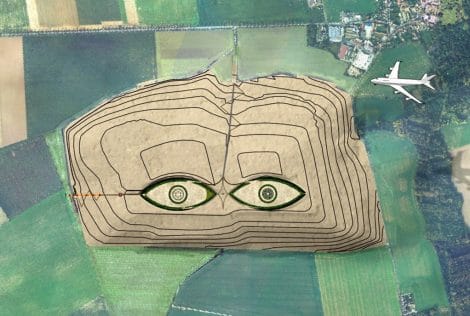 The official launch of the project “The Eyes of the Sky”, a Land Art work by Antoine Grumbach, supported and produced by ECT, was marked by various official acts. A plaque was unveiled, the first tree planted, and a co-operation agreement was signed with the Roissy group of communes (CARPF) and the neighbouring communes of Mesnil-Amelot and Villeneuve-sous-Dammartin. Béatrice Abollivier, the prefect of the département of Seine-et-Marne represented the prefecture of the Île-de-France region. Roland Castro was also present to celebrate this first of Antoine Grumbach’s belvederes or lookout hills. He recalled that this project was in the report he submitted to the President of France entitled “Du Grand Paris à Paris en Grand” or “From ‘Greater Paris’ to ‘Big Paris'”.

An ambitious project of Land Art and landscape design

Situated directly in line with the runways of the Charles de Gaulle airport at Roissy, Antoine Grumbach’s work “The Eyes of the Sky” will be visible to nearly 70 million air travellers. This area for walking will celebrate the biodiversity and agriculture that will share the terrain with broad esplanades. When complete, it will host exhibitions, concerts and events of all kinds. Antoine Grumbach defines the concept of his work of Land Art in these terms: “Where urban areas meet farmland and forest, in the Monts de la Goële region, where inert soil is not ‘spoil’ but a raw material to work with, we are creating a work of aerial art in line with the runways of Roissy airport. This work, consisting of two eyes each 400 yards long, brings together the principle of ‘circular industry’, landscape, ecological mitigation and art on a grand scale. The “Eyes of the Sky” combine aerial discovery of the landscape with walking, agriculture and leisure, both cultural and sporting. This contemporary creation goes back to the tradition of prehistoric geoglyphs. It is part of a project of Metropolitan Land Art celebrating the diversity of the landscapes of the Paris region. This ambitious project will create a set of artificial hills. These hills will be arranged around a circle with a radius of 20 miles around the capital. They will form the “new Belvederes of Greater Paris”, a belvedere being a lookout point.

An extraordinary site for a work that celebrates soil from urban construction sites as a material.

The ECT site at Villeneuve-sous-Dammartin, where the project is to take shape, will be the largest French site for upcycling excavated soil from infrastructure project sites, especially those of the Grand Paris Express, and from building works. Entirely made up of excavated soil, it has a surface of 320 acres and a height of 100 feet. By way of comparison with Paris landmarks, that would mean a perimeter extending from the Square Court of the Louvre to the Place de la Concorde, on which will be placed the two Eyes of the project, each 400 yards long. Antoine Grumbach has used the unique geography of this site to design an art installation celebrating the high quality of the working material that excavated soil represents. It is a fine practical illustration of ‘circular economy’.

By 2030, the site will be served by Line 17 of the Grand Paris Express. It will be less than a mile from the future railway station of Mesnil-Amelot (77) at the end of Line 17. And it is already near the Roissy-Charles de Gaulle airport, which is the international gateway to the Paris region. The project is expected to become an important tourist destination for the département of Seine-et-Marne, and to welcome tourists and visitors from Greater Paris. This project is taking shape under a co-operation agreement between ECT (the company supporting and sponsoring the project), the communes of Villeneuve-sous-Dammartin and Mesnil-Amelot, and the association of communes of the Roissy area. “ECT is very proud to plant the first tree of ‘The Eyes of the Sky’. This project reflects the fundamental values of our company as regards not only our customers in the construction & public works sector but also the local communities where we create our developments: operating a circular economy of excavated soil to create useful developments that are part of a local dynamic. We are very happy to actively support Antoine Grumbach in this Land Art project,” declared Laurent Mogno, chairman of ECT.