Official opening of the ECT centre for biological treatment of soil 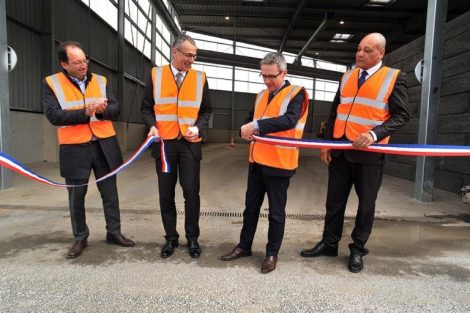 On 5 April, at La Courneuve in the département of Seine-Saint-Denis (93), the first ECT centre for the biological treatment of soil polluted with hydrocarbons was officially opened by Stéphane Troussel, president of the Conseil Départemental for Seine-Saint-Denis, André Joachim, first deputy to the mayor of La Courneuve, Laurent Mogno, chairman of ECT and Reda Semlali, ECT’s commercial director.

A successful example of the conversion of a brownfield site to become a centre for biological treatment of soil, its entirely enclosed structure is unique in Seine-Saint-Denis, in the Île-de-France region and probably in France. It makes it possible to treat polluted soil biologically, in the heart of the Seine-Saint-Denis département, near the construction sites of the Île-de-France.

After the opening ceremony, the officials toured the ECT centre, which has an annual processing capacity of 60,000 tons of soil, treated biologically. Located at La Courneuve, this centre is now receiving, with a reduced carbon footprint, soil from the northern Île-de-France, from adjoining lines of the Grand Paris Express, and soon from the construction sites of the Olympic Games.