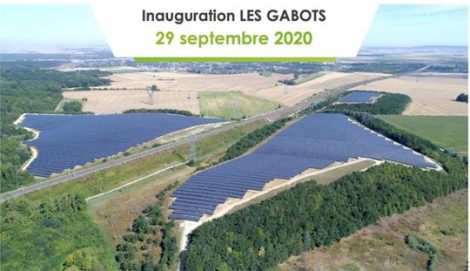 14 November 2019 saw the official installation of the first solar panel of the solar park, and ten months later, ECT and Akuo inaugurated the “Les Gabots” photovoltaic power station, located in the commune of Annet-sur-Marne.

The solar park, consisting of 44,000 photovoltaic panels, covers 45 acres. It will save 847 tonnes of CO2 emissions per year. Its output will meet the electricity needs of 3,700 homes, or about 10,000 inhabitants. It makes the commune of Annet-sur-Marne (with 3,300 inhabitants) a net producer of electricity.

The power station is the fruit of a partnership between Akuo and ECT through their jointly-owned subsidiary ACT-E. The solar panels are installed on landforms made up of inert soil, which makes it possible to optimise the angle of their slopes, thus giving the site a second life. Akuo and ECT intend to repeat the “Les Gabots” project on other sites in the Île-de-France region. The goal is to expand, in particular the production of solar energy, and achieve a peak output of 100 MW from the sites operated by ACT-E.

Apart from participatory investment by regional authorities, Akuo and ECT have decided to give all citizens the opportunity to benefit from the profitability of the “Les Gabots” solar park by letting them invest in the refinancing of the project via a participatory loan on the AkuoCoop digital platform. More than €500,000 has been collected in less than 30 days.

This is intended to promote investment by individuals in ‘energy transition’ with a connection to the regions directly involved. Since it was set up, the platform has made it possible to collect more than €7M in just 4 years, to finance 13 solar power stations for the production of green energy.

Jean-Philippe Dugoin-Clément, Vice-President of the Île-de-France Region: “This ambitious development is part of the expansion of our Region into the domain of renewable energy. It’s an iconic project made possible by investment from the Region via Île-de-France Energies with a stake of €450,000. The bottom line is that this is our solar plan in physical form”.

Stéphanie Auzias, mayor of Annet-sur-Marne: “Annet was keen to be part of the process of ‘energy transition’ that is so urgently needed […]. Annet now has one of the most substantial solar parks in the Île-de-France region, and its maintenance costs are offset by grazing animals on the site. We’re participating in sustainable development”. Christian Marchandeau, former mayor and now deputy mayor of Annet-sur-Marne, concludes: “This solar park is our commune’s greatest asset.”

Eric Scotto, chairman and co-founder of Akuo: “This power station, born from our partnership with ECT, is a source of pride for the Akuo group because it’s our first photovoltaic power station in the Île-de-France region, and to date it’s one of the largest there. The quality of its visual insertion into the landscape is exceptional. It makes us fully part of the dynamic of the mobilisation plan for the ecological transformation of the Île-de-France region being driven by the Region’s president, Valérie Pécresse. We firmly believe that the development of photovoltaics in the Île-de-France region will expand significantly in the coming years, especially on land which is derelict or not in a natural state”.

Laurent Mogno, chairman of ECT: “ECT’s development model is to identify land needing to be enhanced and to devise projects for open-space developments involving the upcycling of excavated soil from sites of the construction & public works sector in the Île-de-France region, and doing so in full consultation with local representatives. We felt it was important to broaden the range of our services to communities and local authorities by adding solutions for renewable energy. Bearing in mind our skills in creating and shaping soil to give them a suitable slope, we were naturally attracted by solar energy. ECT is very proud of this first joint operation with Akuo, which has resulted in this powerful solar park at Annet-sur-Marne”.