The mountain-biking + trials riding stadium at Epône (Yvelines, 78) now recognised by the FFC 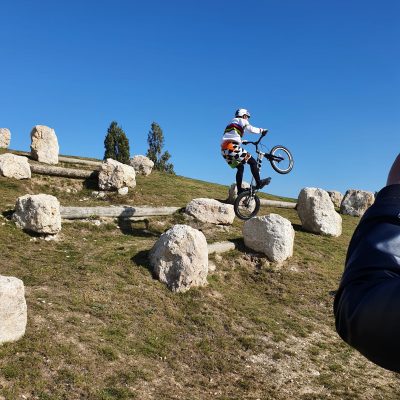 Recognition by the national governing body for this mountain biking and trials riding stadium.

The official opening of the Julien Absalon Stadium, named after the double world champion in mountain biking and cross-country, took place in October 2021, beneath a magnificent autumn sun and in the presence of Guy Muller, the mayor of Epône, and Éric Jacoté, the vice-president of the FFC responsible for mountain biking. Parliamentary deputies Bruno Millienne and Michel Vialay were present. Franck Prestat, the president of the ORC Epône club, and Guillaume Pasquier, ECT’s director of development, also spoke.

On this occasion, Éric Jacoté made it official: The label of “Mountain Biking and Trials Riding Stadium” has been awarded by the Fédération Française de Cyclisme. It’s the first time that the FFC has awarded this double title. It’s a fine acknowledgment of the quality of the facilities.

Official speeches and the cutting of the traditional ribbon were followed by demonstrations of mountain biking and trials riding, with free access throughout the day.

It’s a winning partnership between the town of Epône, the ORC mountain biking and trials riding club, and ECT

It all started when the town council put its trust in ECT to develop a new stadium for mountain biking and trials riding. ECT proposed re-using inert soil excavated from nearby construction sites to create a new landform on which the stadium would take shape. The stadium itself, the slopes and the sports features were designed by the ORC (‘Off Road Cyclist’) association of Épône.

This project is part of a truly responsible ‘circular economy’ for soil. It success reflects the involvement of local organisations and the three partners’ shares ambitions for the facility.

Practice sessions, training and competitions: The future of the stadium.

This new 4.5 acre site will be used for practice sessions and local sports events. The Julien Absalon Stadium is also capable of hosting major competitions, thanks to this new label and its new features: