Accueil > The Eyes of the Sky by Antoine Grumbach and ECT

The Eyes of the Sky by Antoine Grumbach and ECT 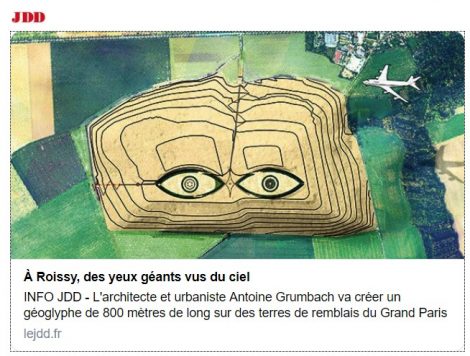 [The “EYES OF THE SKY”, an ambitious project of Land Art, is a work by Antoine Grumbach, being created using excavated soil from the construction sites of the Île-de-France region with the support of the ECT company.

On 25 January Mme Abollivier, the prefect of the département of Seine-et-Marne, officially launched the cultural and environmental project “The Eyes of the Sky”. This Land Art project designed by the architect and town planner Antoine Grumbach and supported by the ECT company is being created at Villeneuve-sous-Dammartin (77) on a site for upcycling the excavated soil that will constitute the raw material of the work.

DIn line with the runways of the Roissy-Charles de Gaulle airport, and because of its gigantic dimensions with two eyes each 400 yards long, the work will be visible to nearly 70 million air travellers. On the site, an area for walking that celebrates biodiversity and agriculture will share the terrain with broad esplanades suitable for exhibitions, concerts and events of all kinds. The project will be completed in 2024, in time for the Olympic Games.]

Read the entire article in the Journal du Dimanche