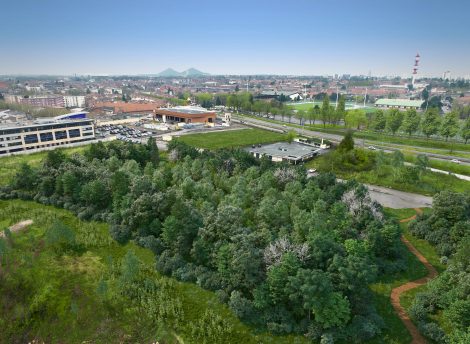 The urban forest in Lens: 3 questions to EPF Hauts-de-France

In the municipality of Lens (62), the project to create an urban forest has been taking shape since September 2021. This project, led by the EPF Hauts-de-France, also includes the City of Lens and the Lens-Liévin Urban Community, in collaboration with the Hauts-de-France Region through the French Regional Forestry Plan. The EPF Hauts-de-France is represented by Guillaume Lemoine, development officer and biodiversity-ecological engineering referent.

Could you introduce us to the EPF Hauts-de-France?

The EPF Nord-Pas-de-Calais was created in 1990, to implement the requalification of mining and industrial wastelands. The region was hit very hard by the coal, metal and textile crises. A State public institution operationally implements a policy shared by the State and the Region. Its action for the restoration of the living environment and urban renewal is based on 7 major axes, including:

Could you introduce us to the Van Pelt wasteland and its restoration project?

These were abandoned factories and buildings on the outskirts of the city. EPF Hauts-de-France’s involvement was to demolish the site. Then to recycle demolition materials and treat concentrated soil pollution. The Lens city council’s order was to restore value to this space located on the edge of the mining ring road. Creating an urban forest on this wasteland is part of the Region’s Reforestation Plan to combat climate change. This renaturation will also be part of the Chaîne des Parcs, a vast metropolitan project.

Why did you decide on a project with ECT?

Once the EPF is awarded the project, there is little budget. And from the outset, the reuse of backfill and the circular economy of land from construction sites are mentioned. In order to create this urban forest, the EPF organised a call for expressions of interest. ECT responded and the project took shape in a great collaborative dynamic.