A number of original development projects have emerged from the collaboration between ECT and Antoine Grumbach, artist, architect and town planner

How did this collaboration between ECT and AG Territoires come about? From a meeting between Laurent Mogno, chairman of ECT, and Antoine Grumbach. And, fundamentally, because of a strong belief they shared, "that soil is not just spoil; it's an amazing resource".

This conviction has given rise to a marathon project, the "Belvederes of Greater Paris". These belvederes or lookout points are a unique project both artistically and for tourism and leisure, on the scale of the wider landscape. The first of them will be "The Eyes of the Sky", a work of metropolitan Land Art on the ECT site at Villeneuve-sous-Dammartin (77).

What are they? Installations in the Paris region, at the boundary between urbanisation and nature. Their objective: To bring together the recycling of excavated soil (by ECT) with a work of Land Art (designed by Antoine Grumbach). 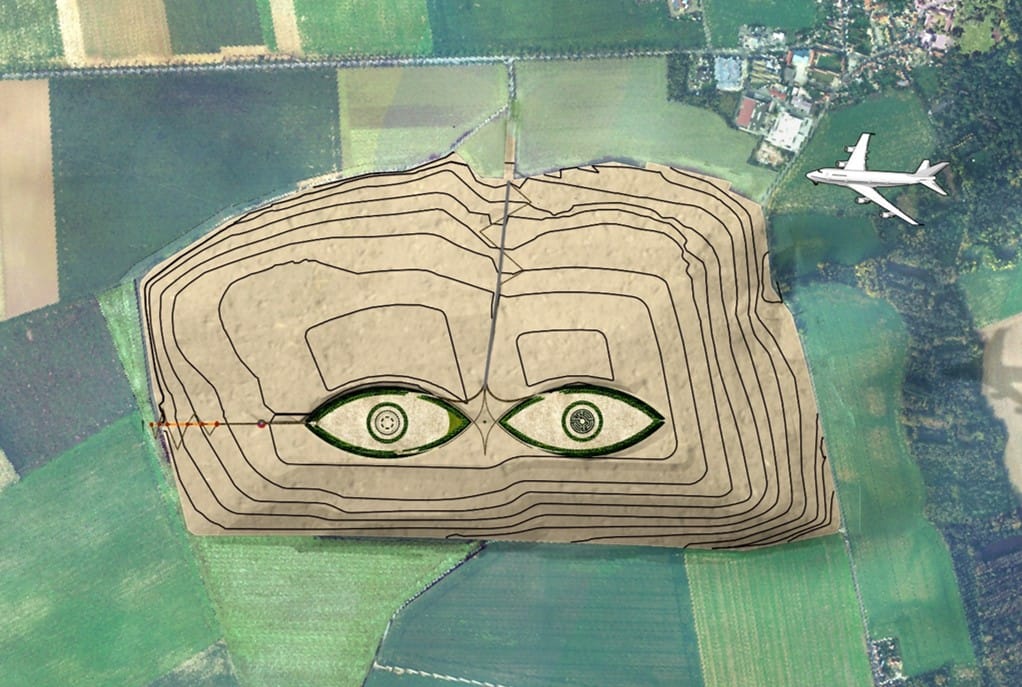 "The Eyes of the Sky", a work by Antoine Grumbach / ECT

"The Eyes of the Sky": land art and leisure

Antoine Grumbach's work of Land Art represents two eyes, each 400 yards long. "The Eyes of the Sky" are outlined on the ground at the ECT site of Villeneuve-sous-Dammartin. 70 million passengers will be able to discover this work of "aerial art" when landing or taking off from Roissy-Charles de Gaulle airport. The ECT site covers an area of 320 acres and is 100 feet high. ECT provided all the excavated soil that went into it, making an absolutely original canvas for this monumental work.

In the words of Antoine Grumbach, its creator: "The outline of the eyes is made up of three rows of trees, which means nearly 1,200 trees altogether. Add to this the 12,000m² of planted slopes around them. In the centre of one eye will be a hedge maze and a belvedere, and the second iris will have an exhibition space".

It is truly a landmark project of sustainable development, organised by ECT and self-funded, in the Île-de-France.

"The Eyes of the Sky" will be open to the public and are intended to be a welcoming family place. This project will also offer cultural activities and leisure, walks, exhibitions, concerts, etc, to people living nearby and across the region.

That's why this innovative project is the subject of a development agreement between the regional prefecture of the Île-de-France, the Roissy group of 42 communes, and the two neighbouring communes of Villeneuve-sous-Dammartin and Mesnil-Amelot.

"The Eyes of the Sky" is a good illustration of ECT's determination to play an important role in a 'circular economy' for soil from construction and public works sites in the Île-de-France region. They are the symbol of a virtuous circle - bringing in inert soil and using it to create new leisure and cultural sites.

Explore our landmark project "Les Yeux du Ciel" ("The Eyes of the Sky") at Villeneuve-sous-Dammartin, by clicking here

The project "The Belvederes of Greater Paris" combines art, landscaping and 'circular economy'.

(Circular economics use maximum recycling with the minimum addition of raw materials, water and energy, unlike the extraction-manufacture-consumption-disposal model of linear economics.)

"The Eyes of the Sky" is only of of many projects planned for the collaboration between ECT and Antoine Grumbach, within the ambitious framework of "The Belvederes of Greater Paris".
These belvederes or lookout points will continue to celebrate the diversity of the landscapes of the Paris Basin. They involve the creation and shaping of new "made hills". The entire set of these hills around Paris will be an archipelago of metropolitan land art.

Antoine Grumbach : "The volume of inert soil from sites in the Île-de-France region is about 10 million cubic metres per year. That's the equivalent of four Great Pyramids of Giza (2.5 million m3). Until now, this has not produced any artistic or cultural creation on the same scale."

Each hill will be an area where visitors can walk surrounded by nature with, at the summit, a lookout point and an orientation table. Other developments and facilities might include an amphitheatre; areas for relaxing, walks or reading; a gloriette or single-storey folly; hanging gardens; or an open-air museum. Visitor facilites will include separate parking for coaches, cars and bicycles. Local people and tourists alike will be able to enjoy a place for walks, leisure and discovering the panoramas of the Île-de-France.

The total number of artificial hills is not yet fixed - there may be nine, ten or twelve. They will be placed in a circle with a radius of 20 miles from the centre of Paris. The sites may be derelict or sensitive land, industrial brownfield sites or inaccessible former quarries. These Belvederes will thus be at the boundary between the urban area and the landscape of agriculture and forestry.

Antoine Grumbach says, "This set of Land Art works will thus highlight, on the scale of the Île-de-France region, the spectacle of the outer edge of urbanisation at the start of the 21st century."

The Belvederes Walk: An invitation to different landscapes.

A. Grumbach: In the 19th century, Haussmann and Alphand created "The Paris Walks". Now at the beginning of the 21st century, the Belvederes Walk will embody discovery of the variety of surprising landscapes that link the city with nature at the outer edge of the Parisian conurbation.

All visitors will find something for them, whatever their sports or cultural interests. A great metropolitan footpath will connect all the Belvederes in a 125-mile itinerary. This walk will invite visitors to consider the transformation of the regions and the fragility of their boundaries.
Also, climbing these hills will take the visitor to a collection of architectural structures, each one different. For example a gloriette (an outward looking single-storey folly), a tempietto (a little temple or tholos), a cabin, etc; and an orientation table to show where the soil came from. 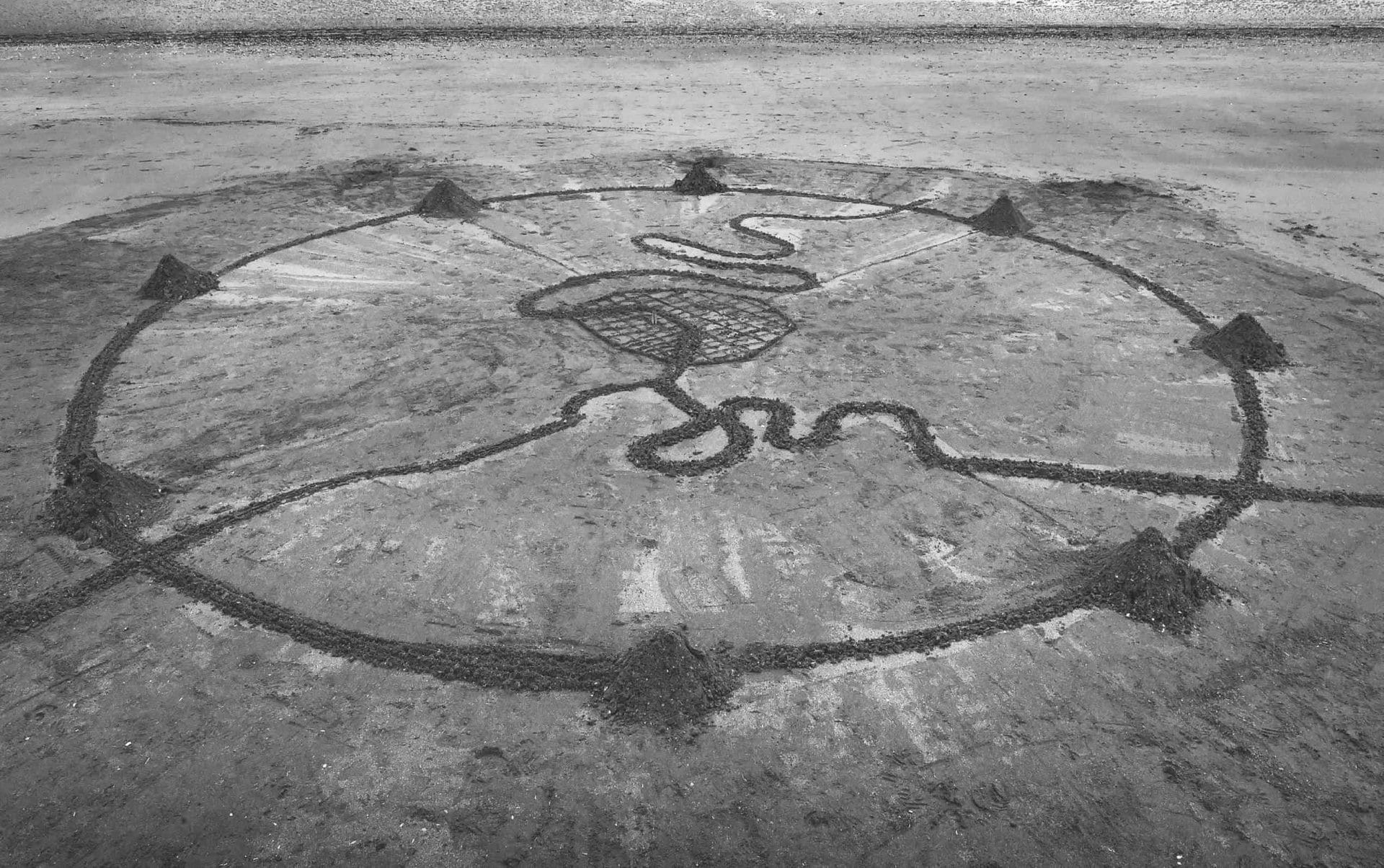 The Belvederes project unites the Land Art of the landscape artist with the dynamic recycling of excavated soil. It will celebrate a kind of metropolitan identity for the 21st century that combines 'circular industry', ecology and cultural identity.

In his book "La Terre comme Matériau" or "Earth as a Raw Material", Antoine Grumbach retraces the path (one of intellectual development, awareness and art) that led him to consider excavated soil as a material, that of the Belvederes of Greater Paris.

ENGAGING WITH LOCAL AUTHORITIES TO ADD VALUE TO THEIR REGIONS
TAKE ACTION : OUR SOLUTIONS FOR SUSTAINABLE DEVELOPMENT
OUR LAND-USE DEVELOPMENTS
DESIGNING AND CREATING THE DEVELOPMENTS
URBAFERTIL: RECYCLING INERT SOIL INTO FERTILE SOIL
X
Gérer le consentement aux cookies
We use cookies to improve your browsing experience and to help us improve our site. By continuing to use it, you agree to the use of these cookies.
Manage options Manage third parties Manage vendors Read more about these purposes
Preferences
{title} {title} {title}