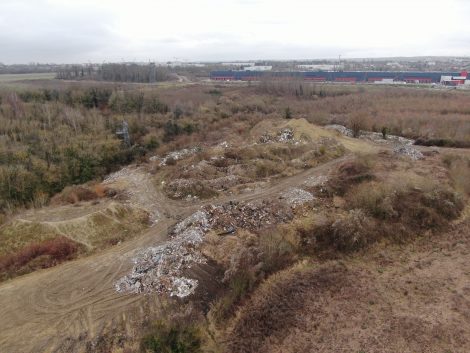 Site clean-up, a key step in healing the landscape

In Boissy l’Aillerie and Puiseux Pontoise, in the Val d’Oise, clean-up operations have begun. This is an essential step in moving to the landscape restructuring phase. The disposal of the 14,000m3 of waste started at the end of January 2022. This should last between 4 and 6 months. ECT bears the cost of this disposal and treatment.

The unauthorised landfill site that has developed in the municipalities of Boissy-l’Aillerie and Puiseux-Pontoise has caused a lot of damage. It could lead to irreparable degradation of the site if no action is taken.

Municipalities helpless in the face of illegal dumping

« The amount of illegal dumping has degraded the site. I would like to thank the Val d’Oise prefecture for taking charge of the case and finding a solution with ECT to restore the site. The fight against this scourge must be based on prevention, by strengthening surveillance and cooperation with law enforcement. Our small communes have no means of reacting to the treatment of unauthorised dumping, which is why it should be considered at the level of the inter-municipalities
Thierry Thomassin, Mayor of Puiseux-Pontoise

« 300 people were occupying the premises in this case. The illegal dumping activities started very quickly, without any intervention to stop the waste traffic. The illegal dump lasted five months and the extensive degradation of the site left the municipality and the owner with thousands of tons of waste. »
Michel Guiard, Mayor of Boissy-l’Aillerie

A broad consultation was carried out:

Thus, it was determined that the site had sufficient available surface area to provide an adequate volume of inert soil. The purpose? To carry out a qualitative, agricultural and landscape project. The reuse of inert soil provides ECT with financial capacity for the project. The challenge is precisely to balance the costs of waste disposal and treatment and the renaturation of the site with the volume of land received.

ECT has several tasks to carry out in the rehabilitation of the illegal dump:

ECT teams and DiRiF ecologists have recreated a nesting area for the Eurasian stone-curlew bird on the ECT site in Villeneuve.

The former landfill site will give way to an agricultural, landscape and hydraulic renewal project within the framework of the Parc Naturel Régional du Vexin Français.